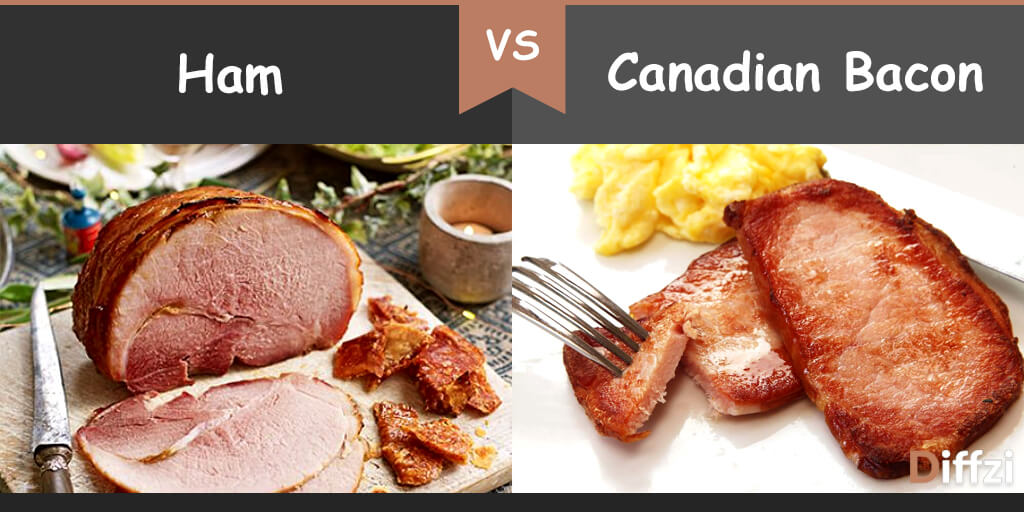 Living in Canada? Are you going to make some meat today?  You can definitely go for Canadian bacon or Ham as both are a good choice for you! Canadian bacon and Ham are quite similar, as they have the same taste as well as the same texture, but these two savory types of meat are different.

The key difference between Canadian bacon and ham is the source of the meat. Canadian bacon comes from the lion cut that runs along the back of the pig and it is very popular in the United States as compared to other countries while ham comes from the primal cut which includes the leg, thigh, and rump of the pig and it is very famous in all over the world as it is also available in different types like American ham, Spanish ham, and cheese ham.

What is Canadian Bacon?

“Canadian bacon is the meat which comes from pork, and it is gotten from the salted and cured lion cuts which run along the back of the pig”.

Canadian bacon is also known as ‘back bacon’ or ‘peameal bacon’, and it is only available in slices in Canada, whereas smoked slices of pork meat which sold in the U.S. are known as Canadian bacon.

Canadian bacon can be prepared at home with the meat being cured, smoked, fully- cooked, and sliced. It is mostly eaten at breakfast; moreover, it is only served when soft and juicy because if served hard Canadian bacon would be tasteless and dry.

Some facts of Canadian bacon are given below

The word ham is derived from the English word ham or hom, which means the’ hollow or bend of the knee’.

“Ham comes from the cut of the thigh, leg, or rump of the pig which often goes through the process of salting, curing, smoking and cutting”.

There are many types of ham which range from all-American country ham to the Spanish Jamon Serrano to the Chinese Jinhua ham. It can be made with the help of mechanical processes or can be bought ready-made from the grocery stores and different meat shops. Ham is available in diced chunks, slices or whole, and it is famous all over the world because of its unique taste. However, fresh ham tastes like pork tenderloin, and dry-aged country ham has a salty taste with a chewier and denser texture.

It is mostly eaten during lunch or dinner, and it can be made properly with the help of other ingredients and by following the recipe. You can make it better in taste by adding black peppers, saffron, and other species, the first phase involves salting of the meat, then letting it soak for a long time, and then the next phase is grilling and dipping it in curry.

Some facts of ham are given below

The taste of Canadian bacon and Ham is quite the same, but both types of meat are different as they come from different parts of the pig and have distinct textures. Canadian bacon is the meat which has obtained from the pork loin cut from the back of the animal. On the other hand, ham is the meat which has obtained from the front leg of the swine. However, if you are going to make breakfast so Canadian bacon is the right choice for you! But if you are making dinner for an occasion so you can go with Ham.