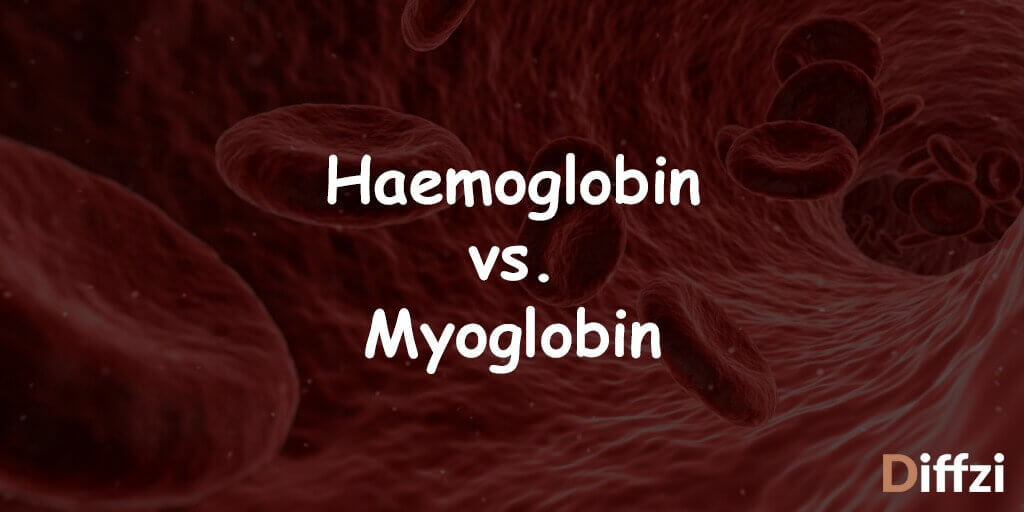 Both hemoglobin and myoglobin are proteins that have the oxygen-carrying capacity. Since the basic function of both proteins is the same but they have many differences in them. Hemoglobin is present in red blood cells. Myoglobin is principally found in muscle cells.

The functions of hemoglobin can be described as; it gives a red color to blood due to the presence of iron. It is the carrier of oxygen and CO2. It played the role of physiologically active catabolite. It maintains the pH of blood. It also plays a part in RBCs metabolism. The functions of myoglobin can be described as; it has the ability to store oxygen which makes the muscle to work more effectively.  It also helps the body in anaerobic situations and in starvation. Myoglobin also plays a role in the regulation of body temperature. The central metal in both proteins is iron, and both are globular proteins. The ligand of both proteins is oxygen. The types of hemoglobin are Hb-A1, Hb-A2, Hb-A3, embryonic hemoglobin, fetal hemoglobin, and glycosylated hemoglobin. Myoglobin is not further divided into types.

Contents: Difference between Haemoglobin and Myoglobin

Hemoglobin is a type of protein which is found in RBCs and has oxygen carrying capacity. It has a tetrameric structure and globular in shape. It is composed of heme and globin chain. Heme is further composed of iron and protoporphyrin. Each alpha unit further consists of 144 residues while each beta unit further consists of 146 residues. The key role of hemoglobin is to transport oxygen throughout the body when blood circulation takes place. It has more affinity for CO than oxygen. That is the reason for the “silent death” of the persons sleeping in rooms when the gas heaters are remained on during the night. It can also bind with CO2, NO and hydrogen ions. Hemoglobin gives a characteristic red color to blood due to the presence of oxygen. It also plays a role in red blood cells metabolism. It helps in maintaining the pH of blood. They are active catabolites. In short form, hemoglobin is also written as Hb. The normal range of hemoglobin for males is 13 to 16 mg per dl while the normal range for females is 12 to 14 mg per dl. The deficiency of hemoglobin is called anemia.  Its oxygen binding curve is the sigmoid type.

Myoglobin is also a protein which is found in muscle cells, and it also has an oxygen carrying capacity. It also has a globular shape, but it is a monomeric protein. It contains only a polypeptide chain. It contains iron and four pyrrole rings which are attached by methine bridges. It binds with oxygen more tightly and firmly. It has not binding capability with other gases. Its oxygen binding curve is the hyperbolic type. In short form, it is also written as Mb. Its central atom is also iron just like hemoglobin and ligand is oxygen. Its extra quality is that it not only binds with oxygen but also can store it which helps the body in the conditions when oxygen supply is deficient. It picks up oxygen from hemoglobin and transfers it to mitochondria of the muscle cell where it is used in aerobic respiration. It also helps the body in temperature regulation. It also helps during the starvation condition.

Key Differences between Haemoglobin and Myoglobin