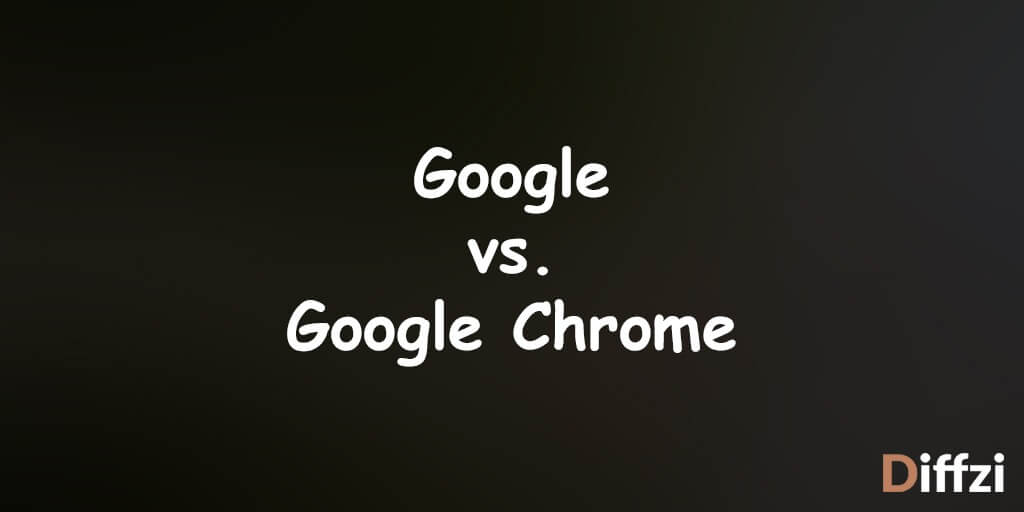 The main difference between Google and Google Chrome that are most widely used for internet users is that Google is a search engine that allows people to find information on the web. That too, without having to open a particular page or website and can get various options under which they can get the data they require in the form of texts, images or even documents. Google Chrome, on the other hand, is a software application introduced by Google that allows people to open and read data from a particular website or page that they have entered into the bar.

This is a word that has become a common household one over the years. The interesting thing about it is that it was not even a word a few years ago but now has been entered in the dictionaries because of the excessive usage. The simple meaning of it will help in developing further details about it. It is the act of searching for information about something on the internet. Most of the searches that take place on the internet are because of the search engine called Google which is one of the most famous if not the most famous ones on the web.

Google is an American company that was founded in 1998 by two people Larry and Sergey who were Doctorate students with the aim of producing a place where people could get information about several things without having to read books. It was a research project by students and now has become an independent company. The process of using it is very simple. People just have to type the address on the web, and then enter the item or the words they want to get information about. Once this is done, then Google shows relevant pages and websites which contain data about the topic which people want to search. This is not the only way of finding the info that is required, people can even search for pictures, videos, news, articles, documents and even audio files related to it from all over the web. There are many other services that are being provided by it now such as web browsers, email clients, maps and other stuff which can be helpful for people who are becoming dependent on the world of internet for their basic tasks.

What is Google Chrome?

It is currently one of the most used web browsers in the world which have been founded by Google. It is a fast and secure place where people can open different websites and manage their content on the internet. People can also save pages that they want to open at a later time while using different accounts such as Facebook from the place. It was introduced in 2008 for Windows but later on has now availability on other networks such as iOs, Android, Linux and Mac. The best thing about this product is that there are no charges to be paid by people who want to use it.

All the Google related products can be integrated with the browser. The process of using it is very simple. People just have to enter the web address of the site they want to visit in the bar and then wait for the page to load and they will reach their destination. Another feature of this is that people can use the bar as their search engine tab, whatever information is entered in the tab, it will open the search results in Google. The only drawback of this is that it consumes a lot of battery for people who are using it but then it loads at a faster speed and provides a lot more option if compared with other similar browsers. Even though it came in the market at a later time, as of today it has 63% of the share in the market, making it a global success in just less than ten years. It also has many other products now such as Chromecast, Chromebook, and Chromebit.

1 thought on “Google vs. Google Chrome”