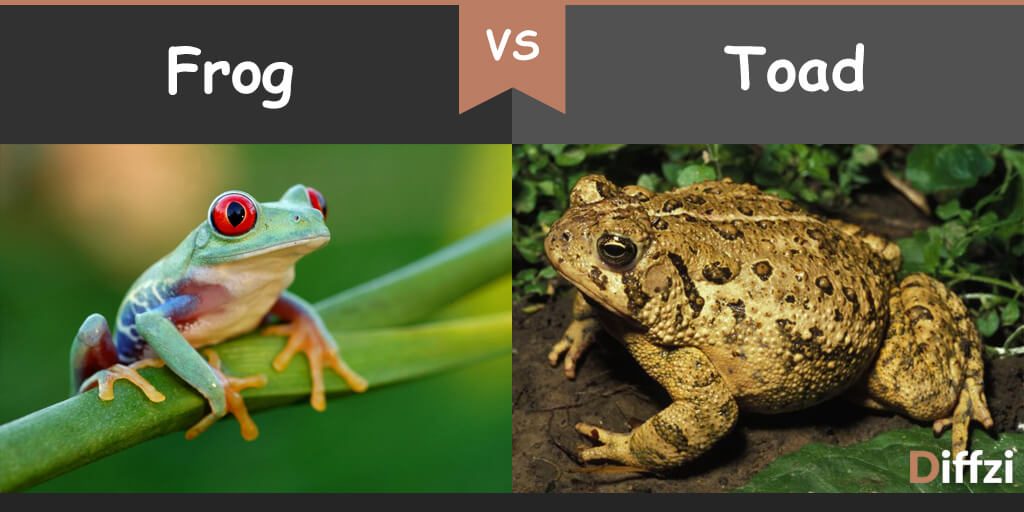 Frog and toad both are amphibians and are similar in many ways but the main difference between them is that they both belong to different families.

According to the Maryland Zoo, frogs and toads do have specific traits that define them. For instance, frogs spend most of their lives in or near water while toads can be seen on lands such as gardens and yards near to water.

From a distance, frogs and toads look the same as they both have short rigid bodies, a wide head, two hind legs, and two front arms but if we closely look at the frogs and toads they look very different from each other that anyone can spot from far away.

Frogs are amphibians that belong to the order Anura and are known for their jumping abilities, croaking sounds, bulging eyes, and slimy skin. They are found all over the world and are among the most diverse animal in the world with more than 6000 species.

The classification of frogs according to the AMNH is: Frogs are commonly seen green in color but they can range from any color of the spectrum. According to the San Diego Zoo, poison frogs are usually brightly colored and dressed in vivid reds, blues, oranges, yellows, and purple with some lovely pattern of spots or stripes.

Frogs are found everywhere except Antarctica but mostly they are seen near a water source to reproduce.

Frogs can eat almost every living creature that can fit into their mouths. This includes worms, spiders, bugs, slugs, larvae, and even small fish.

Frogs are social creatures that love to live in groups called an army, knot, or a colony.  In the early years of their life, group of young frogs also swim together in school much like fish.

To mate, male frogs will croak loudly to attract female frogs and when the female finds a male croak she likes, she releases eggs for him to fertilize.

According to San Diego, frogs become mature between 2 months – 3 years old. After a female frog mature, she can lay an egg from 2 – 50,000 at once, depending upon species.

Like frogs, toads are amphibians that belong to the same order Anura. Toads are quite different from frogs because they have dry, bumpy skin with warts, crests behind the eyes, and the parotoid gland that secretes a poison to save a toad from its predators. Toads are usually brown or green in color that can blend well into its surroundings and escape detection. Poisonous toads are bright in color to warn predators to stay away.

Toads may play dead or puff themselves to appear bigger if they feel threatened by predators.

The smallest toad is the Oak Toad (Bufo Quercis) with a length of only 1.3 inches (0.7 cm) while the largest toad is the Cane Toad (Rhinella Marina) that grows up to 9 inches (23 cm) in length.

Key Differences between Frog and Toad