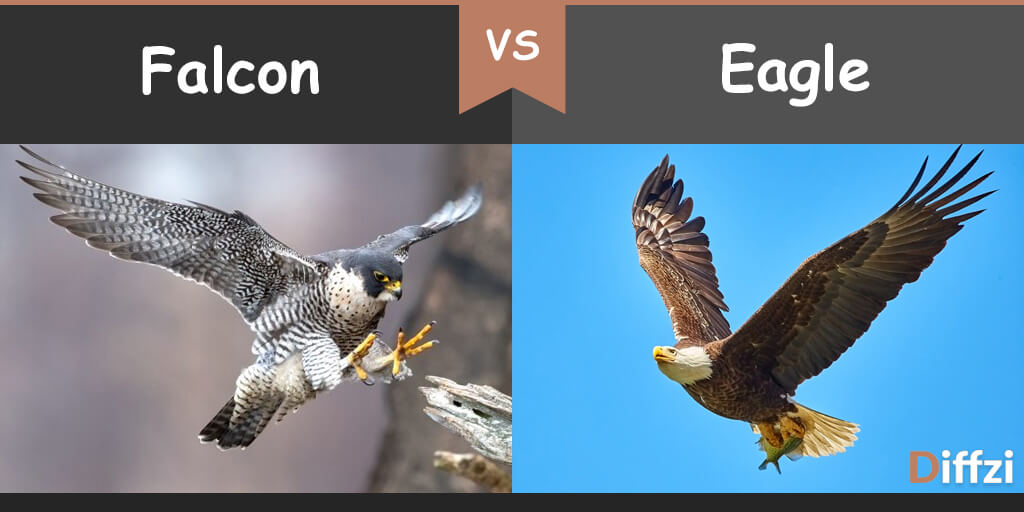 The key difference between falcon and eagle is their size. They may also differ in their appearance (body structure and colour).

The falcon is birds of prey with long wings and a strong angular beak while the eagle is a large carnivore bird, they are famous for their larger size, dominant build, and a heavier head.

Falcons are available in all continents of the world except Antarctica, and the scientific name for falcon is Falco. However, the category of a falcon is Genus which includes about 40 species.

There are more than 60 species of eagle, and most species of eagle are from Eurasia and Africa. Moreover, 14 species may found in North America, 9 in central and South America and three from Australia.

Falcons have a slim body which is comparatively less strong than eagles. They have long and pointed wings with a strong angular beak that has a notch and which helps the falcon to break the prey’s neck easily. They have black and dark brown eyes.

Falcons are very pleasant by nature, and they are not aggressive. They dive and hit the prey abruptly by giving the prey a surprise. There are more than 30 species of Falcon which are available in North-America, Europe, and Asia. Falcon species are classified as vulnerable or endangered.

Some falcon facts are discussed below

Eagles belong to the Accipitridae family, and they are more aggressive by nature. They are known as the larger birds as compared to other birds of prey. In order to kill the prey, first, they catch their prey, then grab it, and crush it with their talons. The talons of eagles are stronger than the falcons, and they have a broad-chest body with broad and rounded wings and different eye colours.

Eagles are classified into four groups, sea eagle, booted eagles, snake eagles, and giant forest eagles. Booted eagle has a wide variety of diet which includes birds, small mammals, rodents, amphibians, and insects, sea eagle feed on a diet of fish, while snake eagle feed on a diet of reptiles, and giant forest eagles mostly feed on various forests animals. However, the largest Harpy Eagle feeds on larger animals which include monkeys, sloths or coatis.

Here are some interesting facts of an eagle

However, both the eagle and falcons have different characteristics and structure. Eagles are large birds of prey with broad and rounded wings and a concave beak and they are known for their larger size, their eyesight is amazing as they can detect the prey up to two miles away. On the other hand, falcons are birds of prey with long and pointed wings and a strong angular beak. They have tomail tooth while eagles don’t have this.