Truth or not but many scientists believed that around thousands of years ago, dogs evolved from wolves. It is also believed that dogs are the evolutionary cousins of wolves because they share a number of the same physical, biological, and behavioural traits. 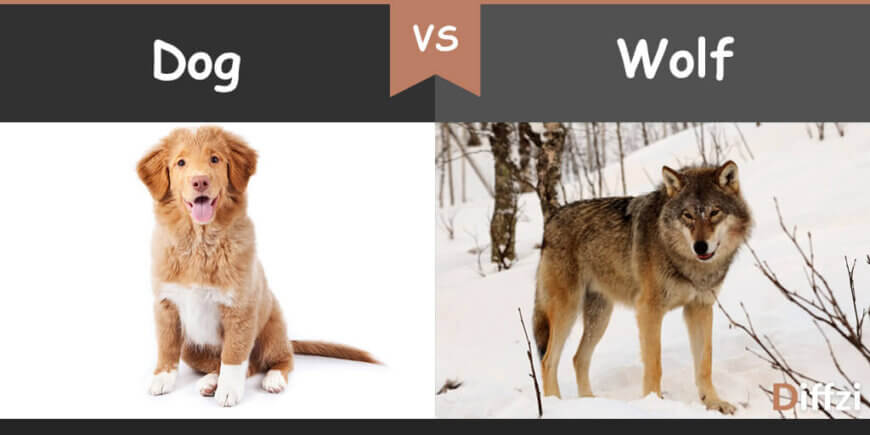 But in reality, they both are different species and are very different from each other in terms of behaviour, diet, size, breed, and many others. Initially, dogs were classified as “Canis familiaris” by Linnaeus in 1978. However, years later in 1993, dogs were reclassified as the subspecies of the grey wolf, and therefore renamed as “Canis lupus familiaris” by the Smithsonian Institute and the American Society of Mammologists.

Evidence that supports this theory of evolution is genetic testing. It is revealed that dogs and wolves share the same number of chromosomes (99%); therefore, they can successfully mate and give life to offspring. There are high chances that in the past, the two species may have interbred while some people believe that they share a common ancestor. Several studies also suggest that the domestic dog that is found today is the first animal to be domesticated at the end of the ice age.

Dogs and wolves have many things in common, but both exhibit many significant differences. The main visible difference between them is the physical appearance and body size. The wolves have a larger and broader head in comparison to their body size while the head of dogs is about twenty per cent smaller with smaller skulls and smaller brains.

The difference is not only limited to head there are many other differences that you can read below.

Contents: Difference between Dog and Wolf

Dog (Canis lupus familiaris), is a domestic mammal that belongs to the family Canidae. It is the subspecies of the grey wolf and is considered as an evolutionary cousin of foxes and jackals. Dogs have been domesticated from wolves around thousands of years ago. Some studies suggest that dogs were first domesticated in East Asia, possibly China. After thousands of years, dogs have developed into hundreds of breeds with a great degree of variation from wolves.

Dogs are looked upon differently in different parts of the world. They are like humans, are highly social creatures. They share many emotions of loyalty, friendship, protectiveness, and affection with humans.

It is roughly estimated that for more than 15,000 years ago, the dog used to live with humans as a hunting companion, protector and best friend. It is one of the most popular pets in the world and has been well-known to as “man’s best friend”.

No matter you are poor or rich, a dog will be faithful and loyal to you and love you to bits.

Dogs are good pets and can easily fit into family life and need caring for as any other pet such as feeding, grooming, bathing, and when ill, will require a visit to the vets. Dogs grow well on affection and will happily wag its tail when showered with love and attention. Dogs follow all the commands given to them and can also sit and sulk if they get told off for doing something wrong.

Wolves are the largest members of the dog family who usually live in family groups called packs that consist of a male parent, a female parent, and some of their pups. Wolves are very intelligent creatures, and their upright ears, sharp teeth, pointed muzzles, inquiring eyes and other facial features instantly convey this quality.

Wolves are considered as keystone species that play a crucial and unique role in the way ecosystem functions. They are scavengers and hunters and will eat anything they catch from large mammals to small rodents. Some of the animal’s wolves hunt and eat include,

The body of a wolf is built for stamina, possessing features ideal for long-distance travel. Their narrow chests and powerful backs and long legs help in their efficient locomotion. Wolves are capable of covering several miles trotting at about a pace of 10 kilometers per hour and have been well-known to reach speeds approaching 65 kilometers per hour during a chase.

Wolves have large stomachs and can consume 20 – 25 pounds of food at any one feeding time. However, they can survive devoid of food for up to 2 weeks or even longer if the prey is scarce. Their digestion system is very efficient, with all but 5 per cent of massive meat feed able to be digested.

Key Differences between Dog and Wolf

It is still not evident that dogs are evolved from wolves, or they are only closely related to each other. They may have the same number of chromosomes, but they are entirely different mammals based on their temperament, diet, and physical appearance.