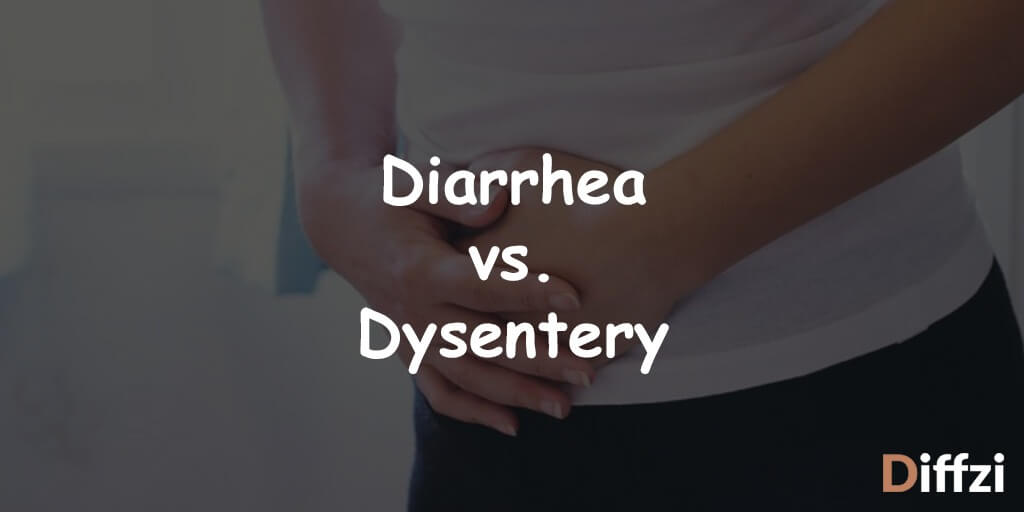 Both diarrhea and dysentery are the diseases of intestine resulting in increased frequency and amount of stools. Often they are considered the same thing, but both have many differences in them. Diarrhea may be of small gut or large gut, but dysentery is the disease of the large gut (colon).  Small gut diarrhea results in watery stools, and after defecation, there are sensations of complete evacuation. In large gut diarrhea, there is a sensation of incomplete evacuation after passing the stools and stools are not watery. Small gut diarrhea does not contain mucus while in large gut diarrhea, mucus is present. When blood is also present in stools along with mucus, it is regarded as dysentery.

In diarrhea, the patient is usually not toxic, but in dysentery, the patient is toxic having a high-grade fever, abdominal pain, cramps, vomiting, and  weakness. In diarrhea, upper epithelial cells of intestinal wall are affected while in dysentery, the whole wall of the colon may involve resulting in ulceration. If diarrhea is left untreated, the immune system recovers it within 2 to 3 days by fighting against the infection while if dysentery is left untreated, it will result in fatal complications and even death.

The complication of diarrhea includes dehydration while complications of dysentery are severe including dehydration, electrolyte imbalance, and septicemia which can cause death. There are many causative organisms of diarrhea like E.Coli, Salmonella, Shigella, Streptococcus and Staphylococcus species and Klebsiella while the most common causative organism of dysentery is ameba. Cell death does not occur in diarrhea while cell death can take place in case of dysentery.

For the treatment of diarrhea, oral rehydration salt is the best modality. In severe cases, antibiotics may be given among which metronidazole is the drug of choice nowadays. For the treatment of dysentery, oral rehydration salt is given. Antibiotic therapy is a must, and antidiarrheal drugs are also added. If no response to antibiotics, them amebicides are also given. If the patient is severely dehydrated, then IV fluids are also given. Ringer lactate is best for resuscitation.

Diarrhea can be defined as increased in the amount of stool (more than 200gm per day) or increase in the frequency of stools (more than normal habits) or increase in the urgency of stools or feeling of incomplete evacuation after passing the stools. Diarrhea is further divided into two types, i.e., secretory diarrhea and osmotic diarrhea. Secretory diarrhea occurs when the secretion of water and electrolytes (mainly sodium) is more than normal in the gut or absorption of water and sodium from small intestine does not take place. Osmotic diarrhea is said to occur when there is osmotically active substance in the gut which hinders the absorption of water and electrolytes from the gut.  Diarrhea may be of the small intestine or large intestine. The patient affected with small bowel diarrhea presents with frequent watery stools. There are no signs of toxicity and feeling of complete evacuation after passing the stools. Large gut diarrhea is characterized by small volume diarrhea with the presence of mucus in it. Diarrhea is treated by ORS solution and antibiotics if needed.

Dysentery can be defined as “bloody diarrhea with the presence of mucus in it.” It is due to the involvement of large gut (mainly colon). If it is not treated properly, may cause septicemia, intestinal ulcers, and even death. Death of intestinal cells may also occur. The most common agent causing dysentery is Entamoeba histolytica. Certain bacteria may also cause dysentery like Salmonella, Shigella, etc. For the treatment, ORS and antibiotics are given. If the patient is severely dehydrated, IV solutions are also given. Antidiarrheal agents and amebicides are also added in severe cases.