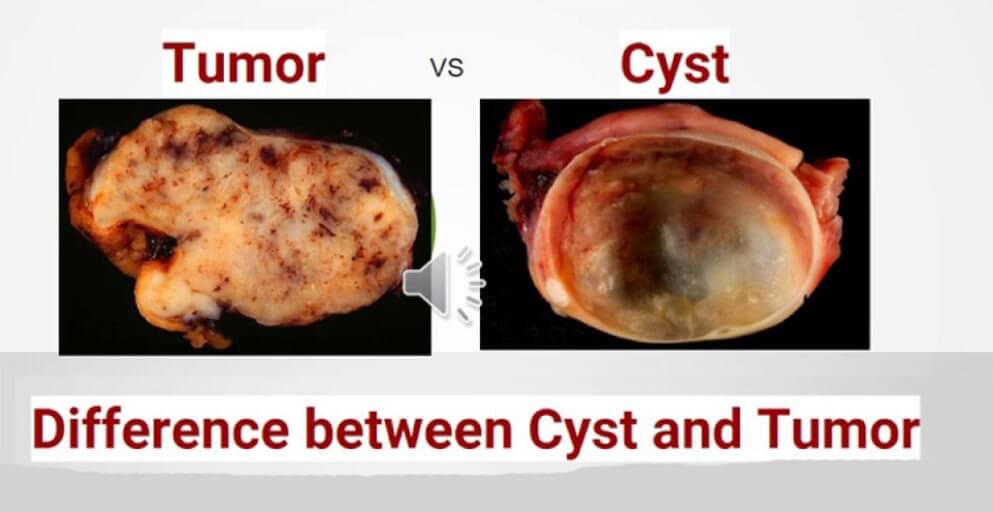 Key Differences between Cyst and Tumor

The key difference between a cyst and tumor is that a tumor is a growth which contains extra tissues in it either benign or malignant while a cyst is a sac which contains fluid, air or some other materials in it.

There are many difference between a tumor and a cyst. Both appear as lump anywhere in the body. The cyst is soft to touch while the tumor is hard or firm to touch. Fluid is present in the cyst but not present in the tumor. A tumor is fast growing, but a cyst is not fast growing.

A cyst is usually blackened in the centre, but a tumour is not blackened in the centre. Whitish, yellow or greenish discharge oozes out from a cyst if it is ruptured, but no discharge oozes out from a tumour because it contains body tissues and not fluid. A cyst is often tender, it means, when it is touched with a finger, pain is felt while a tumor is not tender. A cyst is often able to move around under skin while a tumor may be mobile or immobile.

There are many causes of tumor formation like when there is an uncontrolled division of cells in a body part or when old and damaged cells persist; they accumulate in the form of tumor or when there is abnormal growth of the cells. Certain genes in the cells control the division of the cell. When the function of that gene is defective, there is uncontrolled division. When a cell is subjected to an acute injury during the replication of genetic material, some specific genes repair the genetic material. If due to some reasons, error in the newly formed genetic material persists, it leads to excessive divisions of the cell resulting in the formation of a benign or malignant tumor. There may be multiple reasons of cyst formation, as when dead cells pile up instead of falling off, in different medical and genetic conditions, injury or irritation to one or more hair follicles, during an inflammatory process, during degenerative disorders or defects during the formation of the embryo.

Tumors may be malignant or nonmalignant. Nonmalignant tumors do not cause cancer and are said to be benign tumors. While cysts are always nonmalignant. They do not have cancer-causing potential.

Tumours are diagnosed by physical examination as they are firm or hard to touch. A biopsy is required to know the nature of the cells present within the lump. X-ray, CT scan or MRI may also be needed to know its extent. Cyst is also diagnosed clinically by examination as they are soft to touch. A biopsy must be taken to rule out malignancy. Sometimes, CT scan or MRI is also needed.

There are various methods for the treatment of the tumors. If a tumor is benign in nature, it is surgically removed. If the tumor is malignant in nature, surgery, chemotherapy or radiotherapy is done depending upon the nature of the tumor. The treatment of cyst is simple incision and drainage and antibiotics to prevent the infection.

What is a Tumor?

A tumor is a lump which is formed due to the abnormal division of cells. It contains abnormal cells in it and can form anywhere in the body, i.e. skin, soft tissues, muscles, bones, tendons, ligaments or nerve fibers. Tumors are further divided into two types, i.e. benign tumors and malignant tumors. Benign tumors are the types of tumors which  do not have malignant potential. Often they are felt as a firm lump over the skin while is mobile. If the lump is hard in consistency and immobile, most likely it is malignant. A tumor has no redness around it because there is no underlying inflammatory process. It is uniform in consistency and color. Malignant tumors are cancerous in nature and tend to metastasize if not treated early. A cell has a certain special type of genes in it which prevent the abnormal and extra division of cells and repair the genetic material if there occurs any abnormality. If the function of that genes is defective, tumor formation occurs. Tumors are diagnosed by examination. Investigations are also needed to rule out malignancy. Investigations include X-ray, CT scan, MRI and biopsy. The treatment of benign tumors is a simple surgery. The treatment of malignant tumors is surgery, chemo or radiotherapy depending upon the severity and type of tumors. Sometimes the combined approach is adopted.

What is a Cyst?

A cyst is a sac which contains air or fluid in it. Sometimes any other material may also be present. It occurs due to infection of a hair follicle, retention of secretions, persistence of dead cells or any other cause. There is redness around a cyst due to the underlying inflammatory process. The central area of a cyst is blackened. When a cyst is ruptured, white, greenish or yellow fluid oozes out. It is diagnosed clinically, but sometimes investigations are needed like biopsy and CT scan. The treatment is incision and drainage. Antibiotics are given to prevent infection.

Key Differences between Cyst and Tumor