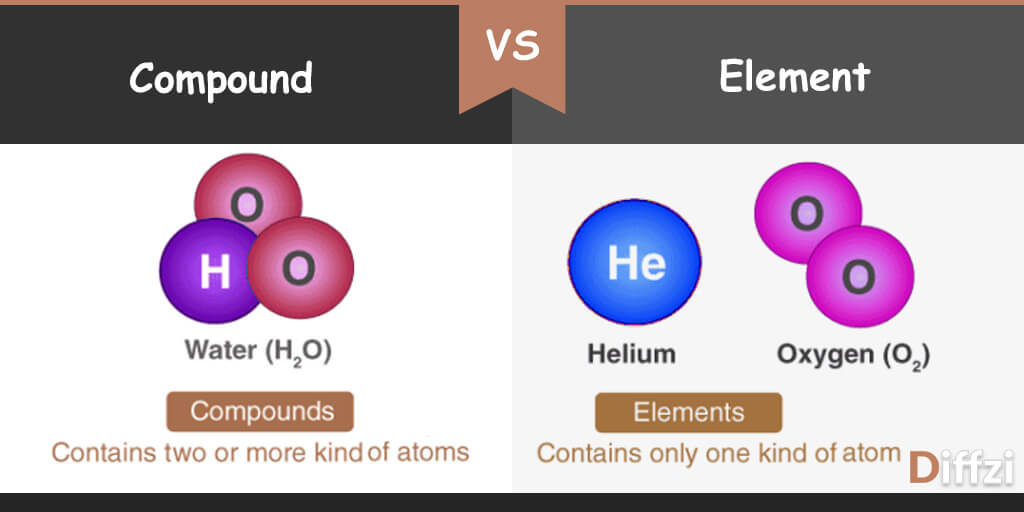 Elements and compounds are two terms that we often read about while preparing for our chemistry exams. To be able to understand them thoroughly, we need to learn the key differences between them.

Both elements and compounds are substances, but they differ from each other based on substances that are combined and through atomic bonding. Elements are categorized into three forms,

While compounds, on the other hand, are categorized based on their bonding into three forms,

To learn the in-depth differences between an element and the compound, look at the comparison chart below.

“Element is the purest form of a chemical substance that is made from a single type of atom.” In other words, all the atoms present in an element will have the same number of protons.

Examples of elements include oxygen, hydrogen, iron, helium, and gold.

Though all elements are made from the same type of atoms, they come in different forms. Depending on the temperature, they can be solid, liquid, or gas. They can also take different forms depending on how tightly the atoms are packed together and are called allotropes.

One common example of allotropes is carbon. Depending on the arrangement of carbon atoms, they can form diamond, coal, and graphite.

There are billions of compounds, but only about 118 elements are discovered until today. Out of these 118 elements, only 94 occur naturally on Earth.

Some elements are grouped if they share the same properties with each other. Below are some of the examples,

All the elements in this group have only one electron in the outer shell of their atom and are very reactive. Some examples are,

As the name indicates, they are unique and have a huge number of electrons present in their outer shell. They are less reactive and are often used as signs as they glow in bright colors when the electric current is passed through it. For example,

“Compounds are substances that are composed of two or more different types of elements that are chemically joined together in fixed proportions.” For instance, water is a compound made up of two elements,

Both of these elements are chemically combined in a fixed proportion of 1:8 by mass.

When metals and nonmetals react, they form ionic compounds. In general, an ionic bond is the electrostatic force of attraction between two oppositely charged ions.

Salt is one of the examples of an ionic bond that consists of Na (Sodium) which is a positively charged metal that combines with Cl (Chlorine) that is a negatively charged non-metal.

Acids are hydrogen containing compounds. Acids are easy to recognize they are composed of hydrogen and an anion (the hydrogen always comes first), and they have no charge.

Examples of different types of Acids are made up of hydrogen and anions, and they do not have charges:

Key Differences between Compound and Element