Taking care of the business and expanding or contracting it becomes a tough job, it all depends on the activities going on and the success or failure ratio. The terms getting discussed here are such that they have broad reaching meanings but differ from each other in a big way. The term centralized gets defined as the action that helps in bringing all the activities taking place within an organization at a single location. On the other hand, the term decentralized gets defined as the measure that helps in making all the activities from one location to several separate entities. 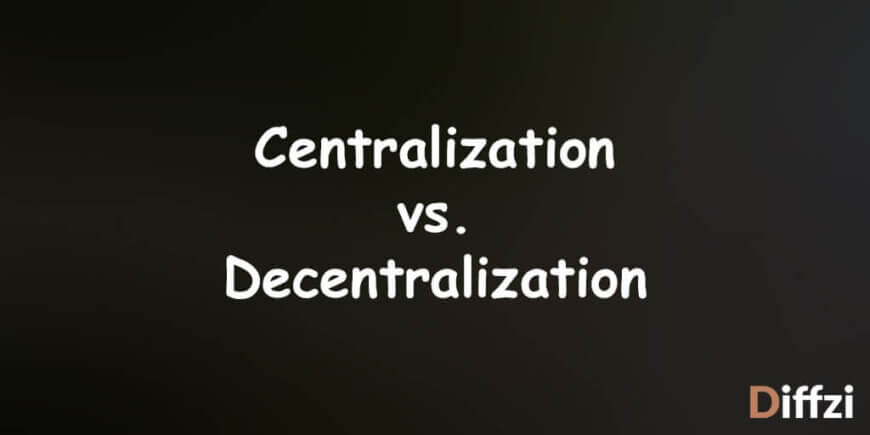 The term gets defined as the action that helps in bringing all the activities taking place within an organization at a single location. Another way of explaining the meaning stays the concentration of something particular such as focus or activity that gets controlled by only one authority. When we talk about centralization, an example that helps goes as when a company at a bigger level has different branches throughout the country, we know that they have a head office that keeps track of all the activities going on in each of those and hence helps in making sure everything stays in order. But, even though someone keeps an eye, at those particular places someone has the authority to do things their ways, such as a manager or operating officer. The things become divided within an entity. Another example stays a football club owned by one person; they have all the power within their hands, and the system remains centralized. The best way to explain the meaning more becomes the use in a sentence. “The tanning, currying, and finishing of leather, an industry largely dependent on the plentiful supply of oak and hemlock bark for tanning, is centralized in the northern and eastern parts of the state, near the forests.” Even in political terms, the system becomes useful, for example, when we talk about a dictator, they have all the power centralized within their reach, no other entity gets to play any role in making decisions, and hence, the system may or may not work.

The term gets defined as the opposite of the word centralization and has the meaning of the action that helps in taking all the activities from one place to several separate entities. Another way of explaining the meaning stays the expanding of the business from one location to many other places to make progress. When we talk about decentralization, it becomes the transfer of power from one person to many others. When a company has one office, and they are working hard and making a profit, they want to make more of it and therefore open branches in different parts of the country. When they do so, each division has their power and worker that keeps everything going and make decisions on their own. Another example becomes a football club that more than one person, in some cases, they are also general public who have some interest. Although the individual with the most power and share within the club has the most power they cannot make decisions based on personal choice, agreement of other parties become necessary. The best way to explain the meaning more becomes the use in a sentence. “The Radicals of Serbia being conservative in all but name, made a working alliance with the clericals of Zagreb and Ljubljana, and under the leadership of Protic favored decentralization, combined with concessions to the expropriated landowners. In political terms, United States become the example of such system where the president may have the most power but have to make decisions according to the agreement with Pentagon and the Senate.