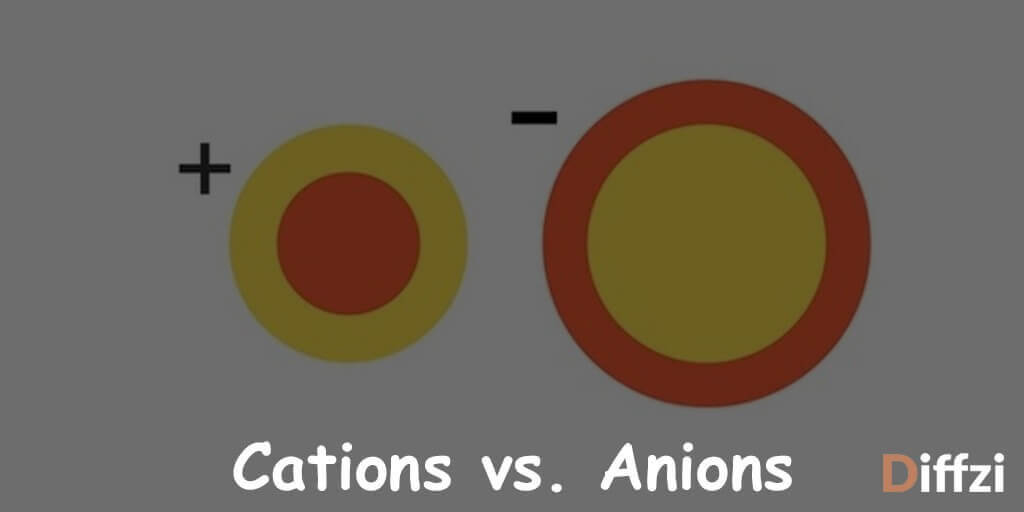 Cation and anion are atoms having a charge on them. Here we will come to know the differences between both of these charged particles. Cations exhibit a positive charge on them while anion exhibit a negative charge.
The word ‘cation’ is taken from the Greek word “ kata “ which means down. While the word anion is originated from the Greek word “ano” which means up. Cations are always attracted towards the cathode which is a negatively charged electrode while anions are always attracted towards the anode which is a positively charged electrode.

Contents: Difference between Cation and Anion

Cations are positively charged particles. They are formed when an atom of an element loses one or more electrons. Atoms do so to gain stability. In other words, they want to get the order of noble gases which are the most stable elements in the universe. The word cation is originated from the Greek word “kata” which means down. In a cation, the number of protons is greater than that of electrons. As we know, protons possess a positive charge and electrons possess a negative charge. Due to the higher number of positively charged particles, cations show positive charge. Cations are always formed from the atoms metals. The reason being is that metals have a tendency to lose electrons. A metallic surface has a countless number of free electrons on it. Thus metals lose electrons, and their atoms exist in the form of cations.

Cations are always attracted towards cathode that is a negative electrode. In a chemical reaction, cations always react with anions to form ionic compounds. One best example of this type of reaction is the formation of common salt, i.e., sodium chloride (NaCl)  in which sodium is a cation and chloride is an anion. The examples of cations can be given as sodium (Na+), potassium (K+), lithium (Li+), magnesium (Mg2+) and aluminum (Al3+). An example among positively charged compounds is of ammonium ion (NH4+).

Anions are always attracted towards the positive electrode, the, i.e. anode. In a chemical reaction, anions react with cations to form ionic compounds. The word anion is originated from the Greek word “ano” which means up. The examples of anions can be given as sulfur (S-), Iodide ion (I-), bromide (Br-), chloride (Cl-), hydride (H-) and nitride (N-).