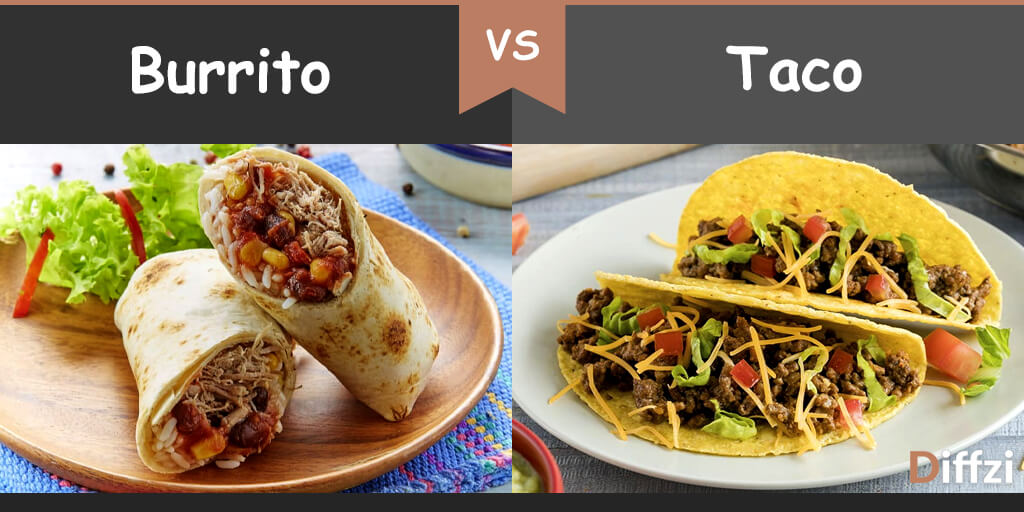 The key difference between Burrito and Taco is the size and filling of these Mexican foods. However, burritos are much larger as compared to tacos. A taco is a soft corn tortilla that is filled with meat with a combination of onion, cilantro, and salsa.

On the other hand, burritos are made with soft flour tortilla, meat, lettuce, tomatoes and cheese; well these burritos are not Mexican burritos.  In Mexico, burritos have a small flour tortilla, different types of meat with sauces, or different fillings inside.
The taco is one of the most traditional snacks whereas the burritos are the 20th-century innovation. Both of these food items are very popular and originated in Mexico.

Burrito is a very well-known Mexican cuisine savory dish, basically a wrapped flour tortilla full of compacted flavorful ingredients.  It can be mostly taken as a complete meal because of its wide variety of flavors. It is available in different flavors like chicken, beef, pork, etc. it is filling or can be considered as a healthy meal.

Mostly burritos start with a large wheat tortilla about 30 cm diameters. You can put the inside filling of your choice in the middle and then roll it up, folding the ends neatly inside the roll. Everything should be closed inside the burrito.

Burritos hold a lot as compared to taco and generally start with beans and rice. There are many varieties of burritos. The dish basically consists of a flour tortilla which is tightly wrapped around the filling, mostly some combination of meat (beef or chicken), and refried beans. Moreover, rice, sauteed bell peppers, cheddar cheese, shredded lettuce can be added. However, in Spanish, a “burro” means a donkey and the word “burrito” means” little donkey”. A burrito can include, much like how a donkey can bear a lot on its back at once, it means a stuffed burrito bowl can still live up to its name, without the tortilla.

They are considered ancient food items and have been around for centuries. Tacos are much smaller in size as compared to burritos. They are generally made from warmed corn tortilla around the size of a hand, wrapped around a simple filling. One taco is served as a light snack and a single food, whereas tacos for dinner would involve eating more than one and they are open-ended. Moreover, the tortilla that is used for wrapping the taco is quite smaller as compared to the tortilla, which is used to wrap the burrito.

Key Differences between Burrito and Taco

However, both burritos and tacos are Mexican dishes, and the difference may vary in their size, wrapping and fillings. Choosing between them depends on your personal choice. Tacos are ancient food items that are made with corn tortillas wrapped around a single filling garnished with salsa, sour cream and sauces. On the other hand, burritos are generally larger flour tortillas and consist of a large number of vegetables and cheese.