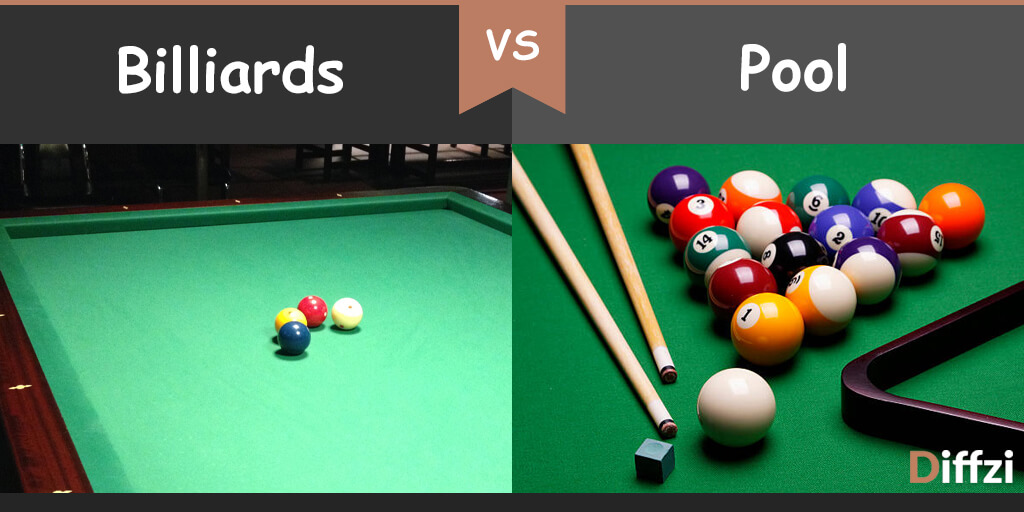 Many people consider billiards and pool is the same thing because casually both games appear to be same. While playing both games, a player uses a long stick with a white tip (also known as cue stick) and strikes the ball. However, there are many differences between them from the number of balls, pockets, table size to cue stick size.

One key difference between them is the number of balls used. In billiards, we use only three balls (yellow, white, and red) where both the white and the yellow ball act as the striker. On the other hand, in pool, the number of balls can change depending on the variant of the game however a full set of sixteen balls can be used (eight balls of solid color numbered one to eight seven balls with a striped of color numbered nine to fifteen, and a last solid white cue ball).

Other differences between them are described below;

“Billiard is a game usually for two people, played on a rectangular table with a designated number of three balls and a long stick called the cue.”

Back to the 15th century in Northern Europe, billiards was played as a lawn game similar to the croquet. Years later, the game moved indoors played on a wooden table with green cloth to simulate grass and a simpler border around the edges.

The word “Billiard” is originated from the French word “billart” known as “mace.” The popularity of this game reached new heights in the early 1800s when people from all walks of life played this game and called it “The Noble Game of Billiards”.

Many countries such as France, Italy, Spain, England, and China have claimed for the invention of this game, but in reality, there is no evidence about the origin of billiards.

The main equipment required to play billiards is,

Tables are rectangular and are generally made up of wood and synthetic materials. The whole surface of the table is covered by a woven woolen cloth, known as felt while the inner edges of the table are angled and are made up of hardened or synthetic rubber, known as cushions.

The cue is a long tapered rod of polished wood ranging in length from about 40 – 60 inches. The small end of the cue is fitted with a plastic, ivory, or fire reinforcement tip.

Carom billiards is played on a table that is five by ten feet and has no pockets. The game is played with three balls, two white and one red, with one of the white balls having a small red dot to distinguish it. The plain white ball serves as the cue ball while the red ball serves as the object ball. The object of this game is to hit the cue ball so that it hits the two object balls in succession which will count as one point. English billiards is played on a relatively large table that is usually six by twelve feet. The game is played with three balls same as in carom (a plain white ball, a white ball with a spot, and a red ball). There are three ways of scoring in it,

Also called a loser, is a stroke in which the striker’s cue ball is pocketed after hitting another ball.

Also called pot, is a stroke in which a ball other than the striker’s cue ball is pocketed after hitting another ball.

Also called as carom, is a scoring sequence in which the striker’s cue ball contacts the other two balls successively.

“It is one of the types of cue sports played on a table with six pockets along the rails to keep the balls from falling off.”

The word “pool” means a collective bet or ante is an indoor game that was initially known as “pocket billiards”.

The history of pool goes back to the 18th century when players enjoyed the game in pool rooms used as a betting parlor for horse racing. Later on, pool tables were constructed so that patrons could pass the time between races. At that time the game got recognized as a sport for rich and redefined people.

The main equipment used in the pool game differs from that used in carom billiards. For example, it is played on a six-pocket table and the balls used are smaller. Two sets of balls are used in this game, one is coloured and the other is striped.

Key Differences between Billiards and Pool