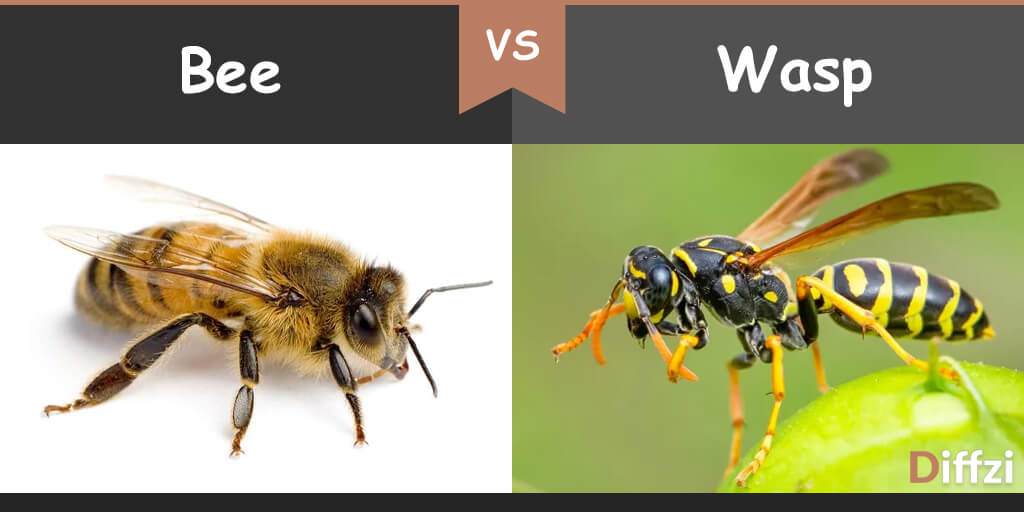 Bee and wasp are two living creatures that appear to be closely similar to each other. Both can fly, sting, and belong to the same order of insects, Hymenoptera. Despite so many similarities between them, there are some visible differences between the two.

The main difference between bee and wasp is body structure. Bee has a rounder body that is fully covered with hairs while wasp usually has a slender and smooth body. Bees have a long and robust bodies measure around 2.45 cm long. Some of their species have entirely black bodies, while others are black or brown with orange or yellow stripes. Unlike bees, wasps are not ambiguous at all. They are also larger than bees with an average length of around one inch.

For learning all other differences between the bee and wasp read out the comparison chart.

There are roughly around  20,000 species of bees that are found all over the world and belong to nine well-known families. Bees are flying insects that live in colonies that consist of the queen bee, worker bee, and the drone. Both the queen bee and the worker bee are female, but only the queen bee can reproduce whereas all the drones are male.

The population of bees is so enormous that they can be found on every continent on the Earth, except for Antarctica. If we look at their physical appearance, the whole body of a bee is divided into three segments;

All bees have a long tongue that works like a straw that allows them to suck the nectar from deep with blossoms. They also have two wings and two antennae that are made up of twelve segments in females and thirteen segments in male.

Bees store their venom in a sac-like structure attached to their stinger, and they only sting when provoked. One of the most interesting facts about bees is that if the worker bee stings, it dies. However, a queen bee is capable of stinging multiple times, but she does not use this capability at all.

Many species of bees are still not well-known. The most common species are honey bees, sweat bees, and bumblebees. However, in terms of body size, the smallest bee is a dwarf bee (Trigona Minima) and it only about 2.1 mm long while the largest bee in the world is Megachile Pluto which can grow in size as large as 39 mm.

They also play a very important role in pollination their strong sense of smell helps them to find the flowers they need to collect pollen. Pollen is not only a food source for bees but also it is a source pf cross-pollination.

Wasp, a relative of bee, is well-known for buzzing and angrily stinging humans. Like bees, they also belong to the same order Hymenoptera, but there are also many visible differences between the bee and a wasp.

One of the most evident differences between them is that wasp possesses a slender, long, and smooth body with relatively few hairs. Wasps have a narrow waist (petiole) which helps in attaching the abdomen to the thorax.  They also have two wings and two antennae with twelve or thirteen segments.

There are about 1,000 species of social wasps that belong to the family Vespidae that live in colonies. For example, hornets, yellow jackets, etc.

They belong to the family Chrysidoidea that live alone. Most of their species build isolated nests for living and do not form colonies.

Wasps are a very important and helpful living creature that helps human by controlling the pest insect population. They like to eat flower nectar, fruits, honey, sweet plants, and sometimes other insects and caterpillar.

A wasp can be found anywhere except Antarctica. Although they are a beneficial creature, especially for the gardeners for controlling the pest population, they can be a nuisance too.  Besides from stinging, their presence can be stinging and presents a threat to those allergic to their string. Always seek medical help immediately if you are stung by a wasp on the neck or in the mouth, or if you feel nausea, unusual swelling, or extreme pain after a sting.

Key Differences between Bee and Wasp

Both bee and wasp are closely related and belong to the same order, but there are many visible differences between them. From the shape of their body to behavior, they are quite different from each other. They feed differently one is a pollinator while other is a predator and both are involved in different task. For example, a bee is a very important source of cross-pollination, while a wasp is responsible for controlling the pest population.