The difference between attitude and behavior is that the attitude reflects our mind´s predisposition about certain people, values, ideas and system etc. while our behavior involves the actual action in response to a stimulus orally or in the form of body language. 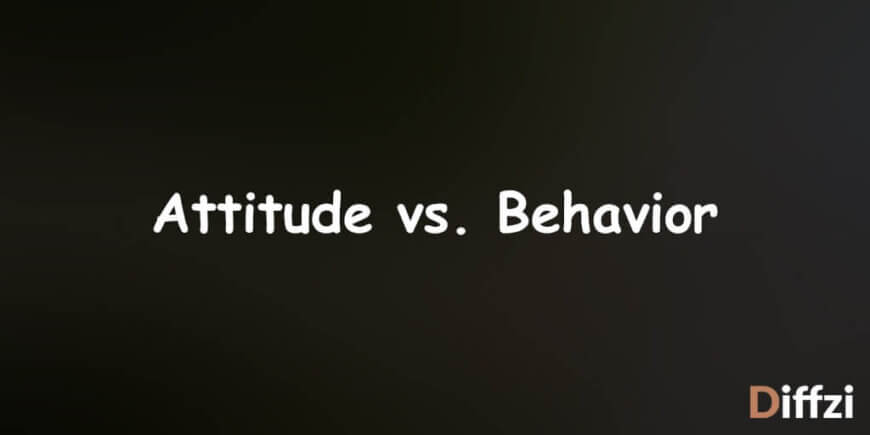 Each person in this world is different from one another, not just physically but also in behavior and attitude.  Attitude and behavior are considered to be the same in our daily life but there is a huge difference between them. Attitude is the internal mindset, thoughts or ideas of a man about certain aspects while behavior is its action orally or through body language in response to a given condition. This is the key difference between them. Further differences will be discussed in detail in this article.

Contents: Difference between Attitude and Behavior

Simply, attitude is a hypothetical concept that depends on the internal mindset or feelings of a person on a certain idea or about someone and cannot be observed. A person’s attitude depends upon its observations and experiences during his life and reflects in his body language or behavior. It prepares us for the future by organising our experiences. Attitude leaves a strong impact on our actions, decisions and opinion etc. Stronger the attitude the more it will affect the behavior. There are different factors that affect a person’s attitude like environment, education and experience etc. A person’s attitude may be positive, negative or neutral, so, reflects a message about him on the people living around. Knowing about the attitude of a person we can predict his behavior. Towards topics of interest, people have strong attitude because they have more knowledge about that topic.

Behavior is the action or response of a person towards a certain condition or stimuli, whether internal or external, conscious or subconscious and voluntary or involuntary. It can be observed and depends on the situation, stimuli or circumstances surrounding it. A person expresses his behavior orally or through his body language in response to any condition which is actually the reflection of his attitude. Behavior is a hereditary trait, i.e. it is transferred from parents to offsprings. It is controlled by nervous system.

Key Differences between Attitude and Behavior

According to the above discussion, it is clear that feelings, opinion or thoughts that cannot be observed are known as the attitude of a person while action in response to a certain condition that can be easily observed is known as his behavior.