The main difference between allele and gene is, gene is a stretch of RNA and DNA and allele is present on chromosome as a fixed spot. 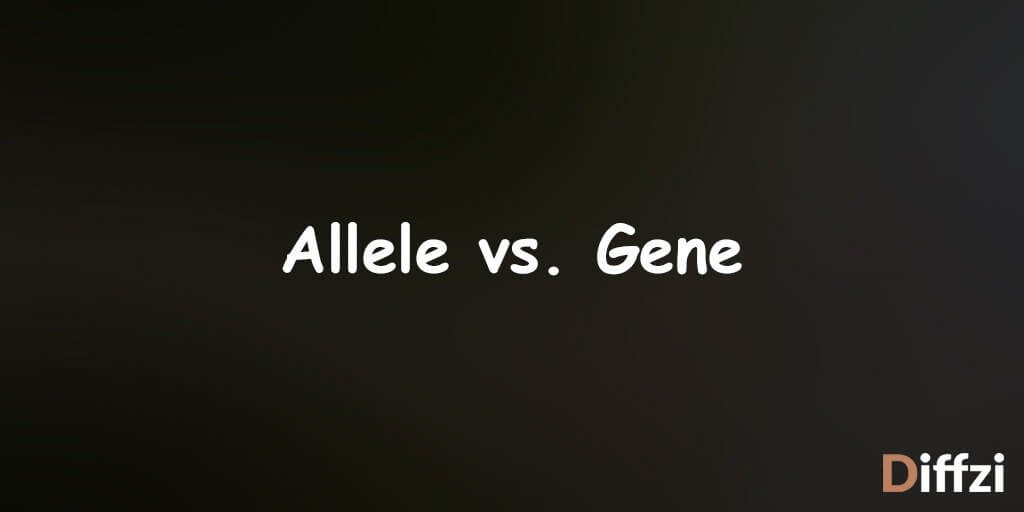 Allele is present as a fixed spot on chromosome. As chromosomes are present in pairs, therefore, organisms have two alleles for each gene. There is one allele present in every chromosome pair. Organisms gain one allele from each parent for every gene, as chromosomes in the pair comes from a different parent. Alleles gained from parents could be different, that is heterozygous. Alleles inherited from parents could be same, that is homozygous. If both alleles code blue eyes, for instance, then those alleles are said to be homozygous. If one allele codes for blue eyes and one allele for brown eyes, then that is said to be heterozygous. In heterozygotes, individuals can express either one or two combination of traits. In the same manner, genotype is actual set of alleles which is carried by an organism and it includes those alleles which are not expressed. This means that they do not end up influencing specific trait for which they code for. Talking about phenotype, it is the expression of genes, that is specific traits are brought into observation as a result of genetic makeup of organism. A pair of alleles make opposing phenotypes. A normal human being has almost 20,000 genes. It is unlikely to inherit same allele for each gene from both the parents. This is where the concept of gene expression came in, elaborating homozygotes and heterozygotes.

Genes are inherited from parents. Important information which is there in DNA is arranged in genes. Genes provide direction to make one specific protein, which is responsible for traits. Genes are there on chromosomes which are long pieces of DNA, wound up around protein. There are many genes on one chromosome. Gene for eye color or any other specific gene like that is present on one location on the chromosome in each person. Our cells have homologous pairs of chromosomes, these chromosomes have same genes but different version of those genes are present and these different versions of genes are called alleles. Genes have the characteristic of mutation and thus they can take one or two forms. They can also form more than two alternative forms. It is  stretch of RNA or DNA that determines a particular trait. Gene is basically a unit of hereditary. Dominance of gene is evaluated by whether Aa or AA are similar phenotypically. Dominants express themselves better when they are paired with either allele.