Immunity is the defense of our body system against the foreign particle. It can be again any infection. The body counteracts when an unknown particles enters the body to protect itself from any harm. Immunity in a person are of two major types. The innate immunity and the adaptive immunity. Innate is however is inherited by the person from the parent. While the adaptive immunity plays a major role as a person grows. The adaptive immunity has two categories, the active and passive immunity. It could be natural and artificial. The main difference in active and passive is that active is against direct antigen or bacteria while passive does not need direct contact with the antigen or bacteria. 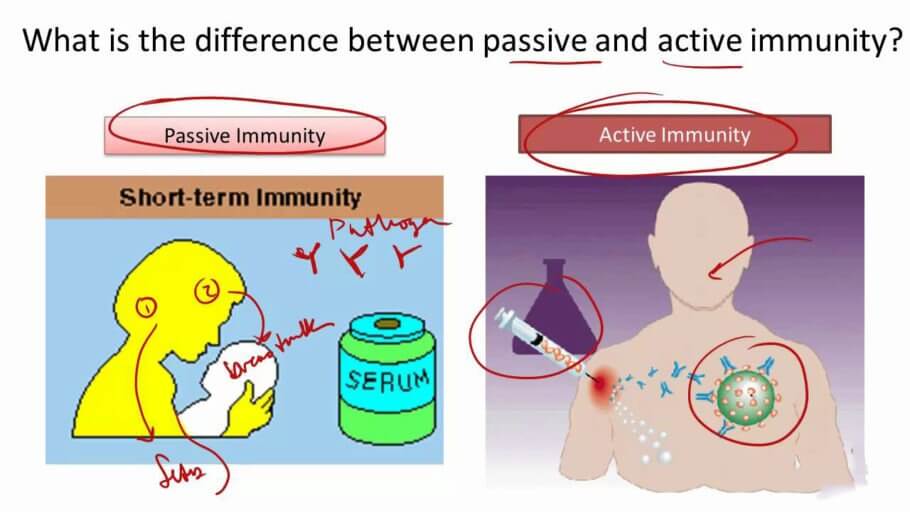 What is Active Immunity?

In active part of innate immunity, the body produces antibody against the antigen or bacteria. These antibodies are made within the body as well as they form memory cells which are responsible to remember the antigen and to produce same antibodies when again the antigen attacks. For example an A antigen attacks the body,  in response to this body will produce MHC cell class 2 or MHC cell 1 in turn activating helper T cells which then activates B-cells (plasma cells) which produce antibodies and memory cells. This is how our body makes their own antibodies against the antigen thus it is a slow process. The example can be exposure to pathogens and vaccination – live attenuated and ect.

What is Passive Immunity?

In passive part of innate immunity, the preformed antibodies are directly injected in the body. These preformed antibodies are taken from a particular donor. These preformed antibodies are injected directly into the veins of the host. The passive immunity shows a fast response. The Fc potion of antibody IgG attaches to the antigen (virus) and kills it. No need of memory B-cells in it to remember the antigen. Passive immunity includes when mother give antibody to the baby in utero, by passing IgG to the baby through placenta. IgA can be transferred through mucus membrane by breast milking the infant. IvIG, that is, intravenous immunoglobulins that are given in certain diseases as a prophylaxis. The intravenous immunoglobulin will skip all the cycle of producing antibodies and will directly trafficking in blood stream attacking the virulence. It is mostly used in immunocompromised patients as they are unable to generate their own antibodies.