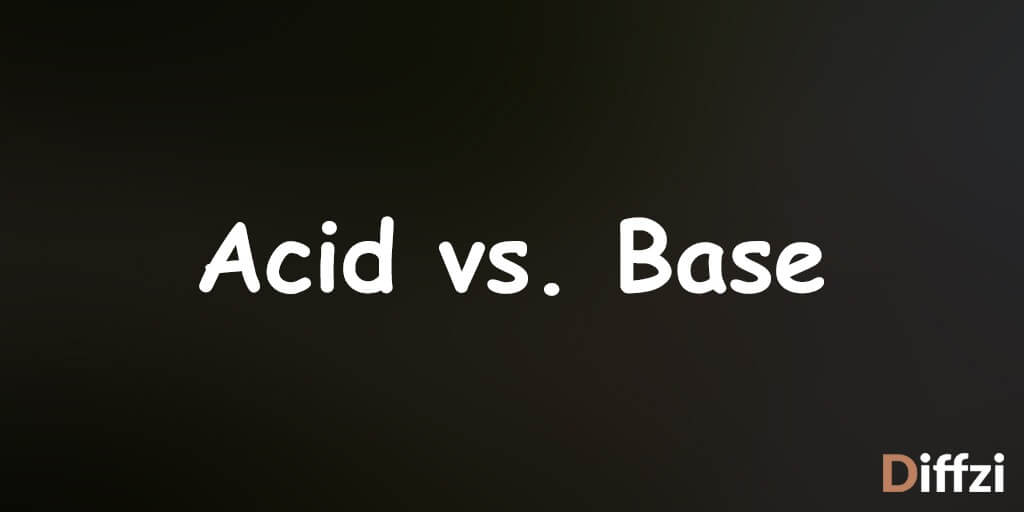 Acids are positively charged due to the presence of positively charged hydrogen ions while bases have a negative charge upon them because of the presence of OH- ions in them. Acids show no color change with phenolphthalein while bases make it pink. The chemical formula of acids begins with H, (Hydrogen) for example HCL (hydrochloric acid), H2SO4 (Sulfuric acid). But this rule is not followed by acetic acid (CH3COOH), which chemical formula does not start with H. The chemical formula of bases ends at OH. For example sodium hydroxide (NaOH). Acids and bases also show a reaction with litmus. Acids change blue litmus paper to red while bases change red litmus paper to blue. Both acids and bases can conduct electricity because of the dissociation of free ions among them.

Acids are used for the cleaning of rusty metals, in fertilization production, as additives in foods and beverages, as electrolytes in batteries and in mineral processing. They are also used as preservatives, as carbonated drinks, in the leather industry and making sodas and flavors to foods etc.

Bases have the ability to remove stains, so they are used in dishwashing, detergents, laundry cleaners and oven cleaners. They are also used in medicines for stomach, i.e. antacids, in armpit deodorants and to neutralize acids.

The word ‘’acid’’ is derived from the Latin word “acere’’ which means sour. An acid is an ionic and corrosive substance which has the ability to give a hydrogen ion, accept a pair of electrons or donate a proton. The strength of an acid is measured by the concentration of H+ ions. A corrosive substance is that which damages or destroys other substances coming in contact with it.  The greater the concentration of hydrogen ions, the stronger the acid is. Acidity is measured on the pH scale. It ranges from 0 to less than 7. The substances having the pH less are more acidic and vice versa.

Ionic compounds are those compounds which are charged either positive or negative. Acids are positively charged due to hydrogen ions.

Bases are ionic and corrosive substances which have the ability to accept a hydrogen ion, give a pair of electrons or accept a proton from any other substance. The strength of bases is measured by the concentration of OH- ions. The greater the concentration of OH- ions, the stronger the base is. Bases range from greater than 7 to 14 on pH scale. High pH indicates the greater strength of the base. Bases are negatively charged due to the presence of OH- ions.

Strong bases are those bases which are completely dissociated into the water, e.g. NaOH, i.e. sodium hydroxide and KOH, i.e. potassium hydroxide.

Week bases are those who are not completely dissociated into the water, e.g. NH3, i.e. ammonia. It has not hydroxide ion and forms week base only on dissolving in water. Other examples of commonly used household bases are borax, baking soda and milk of magnesia (used as stomach medicine).

Key Differences between Acid and Base

Acids and basis have the basic importance in chemistry as well as in our day life. It is worthy to know about them. In the above article, we discussed the differences in acids and bases, their physical and chemical properties and three theories to understand their nature.